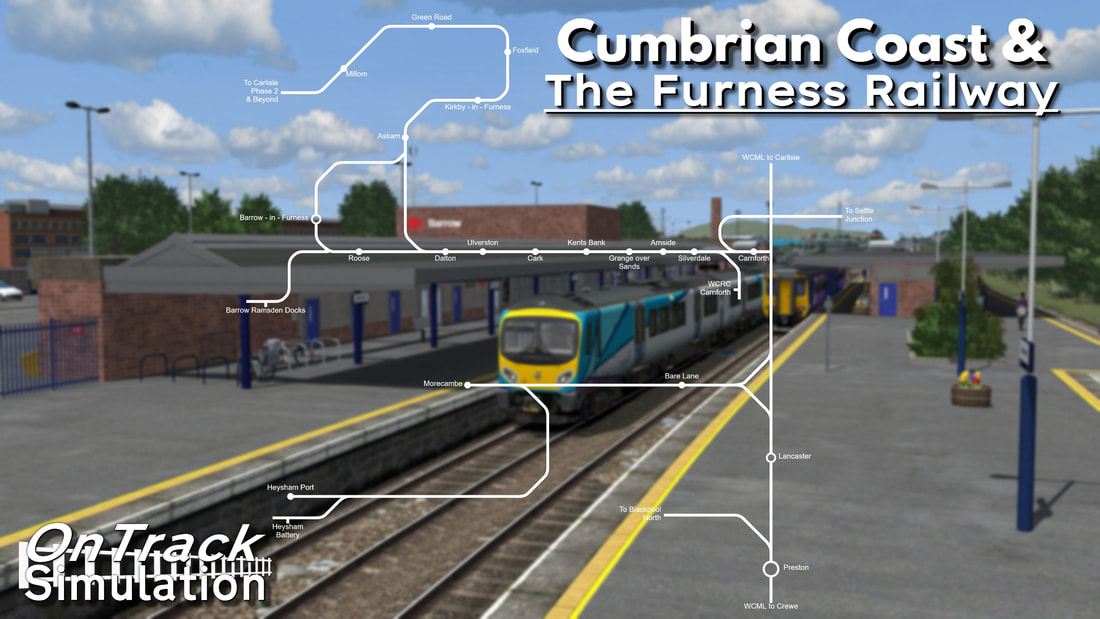 The Cumbrian Coast & Furness Railway V1.0 is an 80 mile route covering the lines from Preston to Morecambe,Heysham Harbour and most importantly Barrow-In-Furness and Millom. The portion of route south of Carnforth is a revamped version of the WCML Over Shap route,with the addition of the fine Preston station model from Alan Thomson Sim's "West Coast Midlands and North West Route". From Carnforth the route utilises a completed and revamped version of Phil Teare's Morecambe Bay & Furness Railway route before reaching our own work in the Dalton area,for the run through Barrow to Millom. The routes have been kindly merged together by Iain Mackay and Pete Mitchell,we appreciate their assistance in making this route feasible.

Version 1 of The Cumbrian Coast Line for Train Simulator has been in creation for around about four years on and off between my day to day work. It has been lovingly recreated for the community to enjoy just as much as I have done building the route. This version of the route features the approximately 80 miles of route focusing from Preston to Millom via Barrow -in- Furness. 20 stations are featured on this version those can be found on the map below on the next page. A number of custom assets have been recreated for the route as well. These feature in the form of Bridges, Signal Boxes, Station Signage and Station buildings. The route comes with a selection of Scenarios to get you going. These focus on Freight, Railtour and Passenger Operations.

Why did I choose to build the Cumbrian Coast? Simply to fill a huge gap in the North West of England, especially a route which boasts of such stunning views of the Cumbrian Fells as you skirt the coastline on the other side. It truly is a unique stretch of railway! The other reason behind the route project coming to life was from enjoying many days out on the route during the time where the loco hauled sets using Class 37/4's operated with Northern Rail.

It is our intention to complete the route northwards towards Carlisle over time,though no promises on when or even if this will happen!

What's Included (and whats not!):

The full list of requirements is at the bottom of the page,and in the linked manual

We highly recommend that you own all requirements before downloading the route!

We recommend that you own all requirements before attempting to load the route.

4 Aspect Simulations:
Railway Signage Pack  - Make sure you have updated to the most recent version!

Just Trains:
Common Library (Recommended Derby to Sheffield/Midland Main Line routes as these are updated regularly),JT store versions moreso
Other JT routes such as SWEXR may be sufficient but are likely missing newer assets

Users who don't own the new (re-released) version of North Wales Coastal:

The legacy V1.2 will remain available on the link below.
This only applies to people who own the original North Wales Coastal route and do not have the newly released version (January 2022).
This version of the route will not be updated and any future updates to the route will only apply to the main copy on the links above.
All other users should download the latest version,available above.
Download legacy V1.2 (OLD ROUTE,SEE ABOVE!)