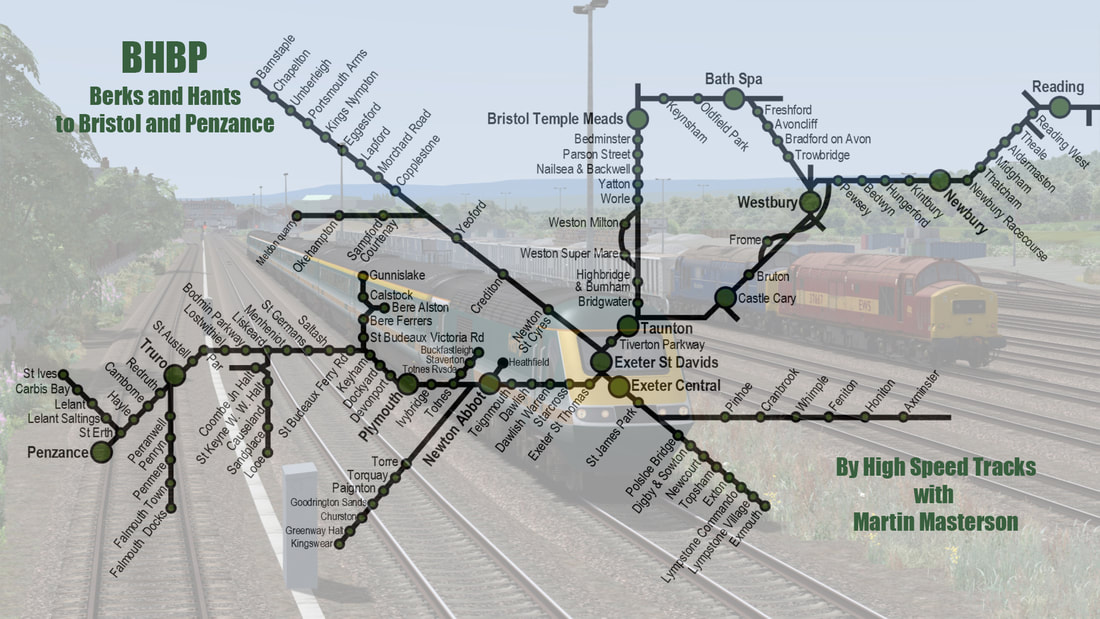 Berks and Hants to Bristol and Penzance V2.0

The combined new BHBP route has well over 300 miles of main, secondary and branch lines across southern and south west England:
What’s new in V2:
• Scenery between Redruth and Hayle has been added in full; the world heritage industrial area around Redruth, Pool, Camborne and Hayle is now complete.
• The rockfall shelter being built between the Parson and Clarke tunnels on the Dawlish sea wall section has been added. Nearby cliffs and sea wall have been completely remodelled and are now true to life.
• What’s known about the improvements currently being made to the Dartmoor Line between Coleford Junction and Okehampton have been replicated in BHBP. The track has been relaid with concrete sleepered welded rail. As more is know (for example about GSM – R masts) it will be added to BHBP.

Required routes and assets
RDC and SWER used assets from a significant number of different sources, so BHBP’s required assets list is quite long. There’s no way around this for now, but the combined route offers hundreds of miles of main, secondary and branch line track, allowing lengthy, varied and totally immersive true to life scenarios.
BHBP just won’t work at all without your having: Train Simulator 2020 DTG – The Riviera Line DTG – The Riviera Line in the 50s Just Trains – South Western Expressways
It may work – but only just in some cases – without you having the routes and assets shown below. BUT there will be big gaps in the scenery and you’d have a poor user experience.
Payware:
Steam
Brighton Main Line
Town Scenery Pack
Platform Clutter Pack
West Somerset
North Somerset
WCML North
European Loco and Asset Pack (Not required if you had Train Simulator before Sept 2012)
Bristol to Cardiff
Riviera Line
Riviera Line in the 50's

Just Trains:
Western Main Lines (none of the route extensions are needed)
Bristol to Exeter Newcastle to Edinburgh
South Western Expressways to Reading
​
Alan Thomson Simulation
ATS OHLE Pack
​
Freeware:
DP Simulation Barnstaple to Exeter Chris Trains NS Station and Object Scenery
UK Trainsim Bridge Kit (Haddock 1000)
Vulcan Productions VP Grass Pack
Major Wales IET/EMU Stop Sign Pack
We strongly recommend that you get hold of and install all of the above required routes and assets before you install BHBP.
​
The vast majority of problems reported in requests for support are caused by failure to have required assets installed

If you require support please use the contact form at the top of this page - support is provided by the route developers.

A selection of screenshots taken across all corners of this stunning route!